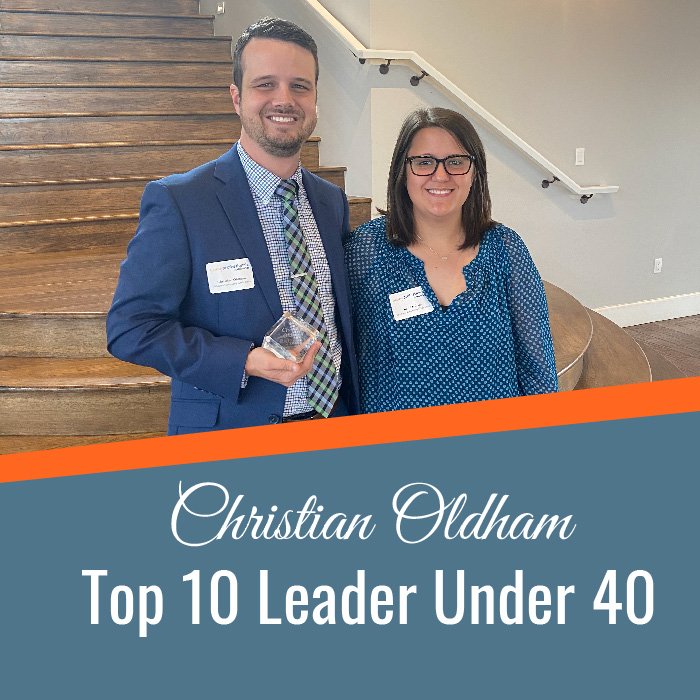 Oklahoma Community Credit Union is pleased to announce two employees were named finalists in the “Leaders Under 40” award recognition program which is organized by the Young Professionals of Stillwater.

Christian Oldham, Manager of Member Services, and Alex Penny, Loan Officer, were among the 42 Stillwater community leaders who were nominated. Nominees were vying for Top 10 recognition.

The Credit Union proudly congratulates, Christian Oldham for being selected as a 2021 Leaders Under 40, Top 10 Award Recipient.

The award spotlights the region’s top young business leaders who excel in their field of work, who show dynamic leadership and who also provide exceptional service and volunteerism in and around Stillwater and the surrounding communities.

“Having employees engaged in the community represents our core values,” stated Daniel Thrasher, President/CEO of Oklahoma Community CU. “While I know Christian and Alex give their time to various community organizations for reasons other than recognition, I am excited to see the Stillwater Chamber and Stillwater Young Professionals acknowledge their leadership in the Stillwater community.”

The Young Professionals of Stillwater oversees the application review process which includes: two independent rounds of five judges each. The judges consisted of community leaders in education, government affairs, business, non-profits and past winners of the awards. The applicants are scored on their professional and philanthropic involvement in the community and/or their profession.

Thrasher stated, “I’m also proud of Christian for being one of the Top 10 award winners this year.  He joins several other leaders in our community that have received the award, including Brittney Federko, OK Community VP of Lending, who was a part of the last group to be recognized in 2019.”

Oldham and Penny were honored at a luncheon held, November 17 at Sparrow Beginning where approximately 100 people attended to honor the best and brightest Young Professionals in Stillwater. Blair Atkinson, President of the OSU Foundation was the guest speaker at the luncheon.

Hana Kimberling2022-01-26T16:27:17-06:00
Page load link
We use cookies to improve your experience on this site. Please visit our Privacy Policy Page for more details. Ok
Go to Top